Learning to Fail: A Guide to the NSF I-Corps™ Program
By Jace Gatzemeyer
September 15, 2021
UNeTech

Part 1: The Scientific Method for Entrepreneurship

In this series, Jace Gatzemeyer discusses the history, goals, successes, and shortcomings of the National Science Foundation’s Innovation Corps (I-Corps™) program. Dr. Gatzemeyer is UNeTech’s Innovation Development Strategist, and one aspect of his job involves helping pre-launch startups in the incubator find their product-market fit. This first installment takes a look at the inception of I-Corps and its foundation in the work of Steve Blank.

In the spring of 2011, Errol Arkilic, a program director at the National Science Foundation (NSF), called Stanford Professor of Entrepreneurship, Steve Blank, at his ranch in Pescadero, California. Arkilic was looking for a way to improve the commercialization rate on university research, which the NSF finances to the tune of about $6.3 billion per year. Many of the innovators funded through opportunities like the agency’s Small Business Innovation Research (SBIR) and Small Business Technology Transfer (STTR) programs were failing — not due to an inability to make their technologies work, but because they couldn’t translate their innovative technology into a successful business.

Arkilic explained the NSF’s commercialization problem and asked Blank if he’d help them solve it. Blank replied, “What the f— is the NSF?”

A veteran Silicon Valley entrepreneur turned academic, Blank had recently created a new course on entrepreneurship for his students at Stanford University’s Columbia Business School. He called it the Lean Launchpad. Combining elements of his own customer discovery model, as well as Alexander Osterwalder’s Business Model Canvas and agile engineering practices, Lean Launchpad was based on Blank’s fundamental belief that startups aren’t like — and cannot be operated like — established businesses. “A startup is an organization formed to search for a repeatable and scalable business model,” he wrote on his blog in 2010. Thus, rather than developing traditional business models or building perfect products, the first thing entrepreneurs needed to do was to “get out of the building,” to test their assumptions. “By focusing on hypothesis testing,” said Blank, “the Lean LaunchPad had actually developed something akin to the scientific method for entrepreneurship.”

When Arkilic suggested adapting the Lean Launchpad course into a program for academic innovators, Blank was thrilled. He believed that his course represented “an approach that would immediately make sense to the scientists and technologists NSF was funding,” he said. For Arkilic, who had worked for seven years as engineer at various Silicon Valley startups, this was precisely the appeal of the Lean Launchpad methodology: “It’s all about how to apply the scientific method to market-opportunity identification, and that is exactly why this method is the one the NSF selected.” 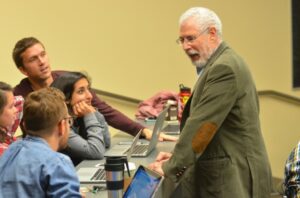 The NSF debuted its course, which was named “Innovation Corps” or “I-Corps,” the following fall. It was described in the press as “an 8-week pilot course to train scientists in how to take that first step from the laboratory to the marketplace.” Announcing the program’s launch in a September issue of Nature, Blank wrote, “The I-Corps project will train scientists for business by teaching them a process that gets them back to the roots of Silicon Valley, by embracing experimentation, learning and discovery.” The program, he explained, would be open to any scientist who had received an NSF grant in the previous five years and would give each of the 100 participating teams $50,000 in seed funding.

Blank encouraged scientists to imagine business models as hypotheses, proposed explanations made on the basis of little evidence as the starting point for further investigation. He told them to embrace this scientific notion of failure — as a chance to pivot and change one’s assumptions — and bring it to the process of startup commercialization. “It is a truth not always universally acknowledged,” he wrote, “that no business plan survives its first interaction with customers. And, faced with such failure, it is scientists, not MBAs, who are most able to rethink their approach.”

To get this early “failure” over with as quickly as possible and begin “rethinking” based on it, the primary task I-Corps participants would be asked (or, rather, commanded — the course initially employed an aggressive boot-camp tenor) to complete was very simple: talk to potential customers. Before settling on a business plan, the aspiring scientist-entrepreneurs of I-Corps would need to form a hypothesis and test it by conducting 10-15 customer interviews per week and presenting their findings to the rest of the class. Conducting customer discovery interviews would get I-Corps participants out of their labs to find potential customers and understand their needs, but it would also prove very challenging for many of them.

“The I-Corps is an experiment in reviving this [scientist-as-entrepreneur] culture and exploiting what US science and Silicon Valley are great at,” wrote Blank. “If it works, it will change the way we bring discoveries ripe for innovation out of the university lab and into the business world, and it will be a shining beacon for other national programs.” But would it work? And how effective would it be? The first few years would give a clear indication. We’ll cover these topics in our next installment, in which we’ll examine the early years of the I-Corps program, look at the results of its first few cohorts, and walk through the peculiarities of its unique approach to technology commercialization and entrepreneurship.

Check out Learning to Fail: A Guide to the NSF I-Corps™ Program Part 2: Entrepreneurial Boot Camp!