In this series, Jace Gatzemeyer discusses the history, goals, successes, and shortcomings of the National Science Foundation’s Innovation Corps (I-Corps™) program. Dr. Gatzemeyer is UNeTech’s Innovation Development Strategist, and one aspect of his job involves helping pre-launch startups in the incubator find their product-market fit. This second installment takes a look at the program’s early results and its unique approach to technology commercialization and entrepreneurship.

From the second-floor landing of his magnificent coastal California ranch, Steve Blank looked out across the 21 teams assembled below, members of the first ever National Science Foundation (NSF) Innovation Corps (I-Corps) cohort. Their projects spanned a wide range of potential products, from technology capable of detecting explosives to a smart device for delivering pain medication, and their respective academic backgrounds spanned a wide range of research fields, from nanomaterials to terahertz electronics.

To the teams assembled in below, Blank said, “You’re in entrepreneurial bootcamp; you need to be smart, focused, and eager.”

A veteran Silicon Valley entrepreneur turned Stanford professor, Blank had adapted his unconventional Lean Launchpad entrepreneurship course to create the I-Corps curriculum. Now he would adapt his experience as an airplane mechanic during Vietnam War to set the tone. 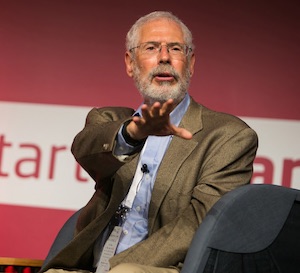 Steve Blank at the Startup Instanbul Conference in February 2016

“We needed to figure out how to make these guys in their 40s and 50s, who are unquestioned in their field, get out and move as fast as kids in hoodies and flip-flops,” Blank explained. The solution, he thought, was to humiliate them. “They let you know you’re a complete novice at business,” said one early participant. “It’s very humbling.”

On day one, teams presented their respective business models, at which point Blank offered deliberately scathing criticisms. In his Lean Launchpad course, he had taken the same “ruthlessly direct” approach, warning in the syllabus, “We will be direct, open, and tough — just like the real world. The pace and the uncertainty accelerate as the class proceeds. This class pushes many people past their comfort zone. If you believe that the role of your instructors is to praise in public and criticize in private, do not take this class. You will receive critiques in front of your peers weekly.”

In I-Corps, this harsh pedagogical tenor remained central. You may be a brilliant scientist, Blank says, but “in my world you don’t know s—.”

The teams themselves featured varying levels of entrepreneurial and academic experience by design. Each team was composed of three members: 1) a Principal Investigator, typically “a faculty member, senior research scientist or postdoctoral scholar with deep and direct technical expertise in the actual core technology about which the I-Corps team is exploring commercial potential;” 2) an Entrepreneurial Lead, who “could be a post-doctoral scholar, graduate or other student or other personnel with relevant knowledge of the technology and a deep commitment to investigate the commercial landscape surrounding the innovation;” and 3) a Mentor, usually “an experienced entrepreneur with proximity to the institution and experience in transitioning technology out of academic labs.”

The course began with three days of in-person training at Stanford University. Next, teams were asked to conduct 10–15 interviews with potential customers and report back to the rest of the cohort in 15-minute presentations at the end of the week. Teams who came back without feedback from at least 10 customers were thrown out of the room. No exceptions. This was entrepreneurial bootcamp, after all.

Why focus so much on interviews? As he explained in his 2003 book, The Four Steps to the Epiphany, Blank believes that startups often overlook “customer discovery,” the crucial process of verifying that people actually want a product before wasting enormous amounts of time, energy, and money to build it. Entrepreneurs who engage in this rigorous customer discovery, says Blank, are constantly telling him “‘I never would have known this’ or ‘I wouldn’t have understood it if I hadn’t heard it myself.’”

By the summer of 2012, the first two I-Corps classes were complete, and the program was deemed a success. In a blog post, Blank wrote “Our goal teaching for the National Science Foundation was to make a dent in the universe. Could we actually teach tenured faculty how to turn an idea into a company?  And if we did, could it change their lives? We can now answer these questions. Hell yes.”

The metrics he used to pronounce the universe thoroughly dented were course evaluation surveys. Of the first two I-Corps cohorts, 95% of participants believed that they had found a scalabable business model, and 98% felt they had found “product/market fit.” Teams were successfully testing their business hypotheses, too — the first cohort averaged 80 customer meetings per team; the second averaged 100.

In the next few years, the NSF would waste no time in expanding the I-Corps Program, going from a budget of $7.5 million in 2012 to $18.8 million in 2013 and beginning to create “nodes” at research universities across the country. How is the I-Corps Program doing today? How many teams have been trained? How much funding have participating startups raised? We’ll answer these questions and take a look at the current state of I-Corps in our next installment.