Learning to Fail: A Guide to the NSF I-Corps™ Program
By Jace Gatzemeyer
November 9, 2021
UNeTech

Part 3: A Decade of I-Corps

In this series, Jace Gatzemeyer discusses the history, goals, successes, and shortcomings of the National Science Foundation’s Innovation Corps (I-Corps™) program. Dr. Gatzemeyer is UNeTech’s Innovation Development Strategist, and one aspect of his job involves helping pre-launch startups in the incubator find their product-market fit. This third installment takes a look at the current state of the I-Corps program.

When the National Science Foundation (NSF) launched its Innovation Corps (I-Corps) program in 2012 not even its primary architect, Steve Blank, could have predicted its success. Blank did know, as he told Forbes in 2014, precisely “what has been screwed up with the last 30 years of grant funding” — namely, “a good idea is not going to help anyone unless it succeeds in getting to the commercialization stage.” 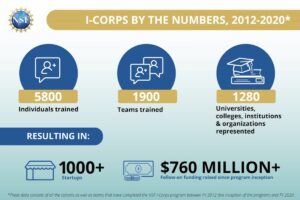 With the goal of teaching teams of scientists and researchers how to effectively bring their innovative ideas to the marketplace and build successful companies, Blank led the development of I-Corps in 2011. By the time the program reached its tenth year of existence in 2021, it had  educated more than 5,700 participants (just over 100 cohorts) and expanded to the National Institutes of Health (“I-Corps at NIH,” launched in 2015) and the Department of Energy (“Energy I-Corps,” launched in 2016). To date, NSF I-Corps has explored technologies by over 1,900 teams, more than half of whom have launched startups, which have cumulatively raised more than $760 million in subsequent funding ($426 million in public funding and $335 million in private investment).

In addition to its impressive growth in number of participants, the NSF has grown spatially over the last decade. Almost right from the beginning, the I-Corps program began expanding geographically, creating I-Corps “nodes,” consortia of multiple universities responsible for delivering a standardized curriculum, and I-Corps “sites,” universities providing internal institutional support to scientists and engineers. Today, there are nine “nodes” and 99 “sites” nationwide, but the NSF has recently adopted a more integrated structure by organizing these diverse institutions around five regional “hubs,” the Great Lakes region, the Mid-Atlantic region, the New York region, the Northeast region, and the West region.

The I-Corps program has also made strides in addressing issues with lack of diversity. In addition to providing a mandate for the I-Corps program, the American Innovation and Competitiveness Act (AICA) stipulates that I-Corps should continue to promote a strong innovation system by investing in and supporting female entrepreneurs. The number of women participating in I-Corps continues to grow, and in 2020, forty-nine percent of teams completing I-Corps training had one or more women on the team. NSF has also extended the AICA mandate to include individuals from underrepresented groups. In the Fall of 2019, NSF entered into a three-year cooperative agreement with The National GEM Consortium (GEM, formerly Graduate Education for Minorities), a privately funded, non-profit graduate education organization connecting highly qualified minority graduate students to a national network of more than 150 top-rated universities, government research facilities and leading multinational corporations.

The current Director of the NSF, Sethuraman “Panch” Panchanathan, participated in one of the first cohorts in the summer of 2012. “We gained many, many things from the I-Corps program,” said Panchanathan. “I-Corps offers a unique opportunity to have your business idea vetted through key principles that help in assessing whether your idea is well worth investing time and energy in. If you decide it is, I-Corps teaches you how to structure your thoughts in a way that it can be successful. Or if it proves to be an idea that may not have commercial potential, I-Corps teaches you how to recognize that early in the process so you can pivot and do something else. From that perspective, failure is also a success. Failure presents a good learning experience for you to be able to ultimately succeed in what you want to do—to learn how you want to contribute and what impact you want to make. I-Corps provides lasting inspiration that certainly continues to express itself in other ways, in other forms, and in other kinds of activities that you do.”

Are you an academic scientist or engineer with an invention or an innovative idea? Are you a researcher with an itch for entrepreneurship? Do you want to translate your cutting-edge research into commercial success? If so, NSF I-Corps can help you extend your focus from the laboratory to the marketplace and build something that solves customers’ needs. How? By helping you talk to customers, fail fast, pivot strategically, and ultimately create a product people actually want to buy.