Though a lot of uncertainties remain in the post-Covid world, one thing is certain: people are finding new, flexible, creative ways to do their jobs.

For over 20 years, coworking spaces have been bringing companies, entrepreneurs, and businesses together in a shared space for a monthly fee. You can rent a room, a suite, a cubicle, or just a seat at a communal table, depending on the venue. Many of them have 24-hour access. This new work style has become increasingly popular for freelancers and entrepreneurs who grow tired of working from home.

Omaha has many options for coworking spaces, from downtown to West Omaha to the suburbs. Commerce Village and Modus Coworking are some of the most popular downtown options. 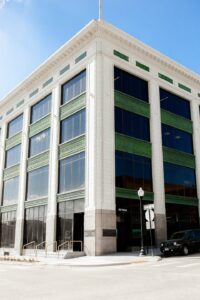 As company structures continue to shift, it’s likely that a coworking approach may become more popular. But the origins of coworking are just as interesting as the novel idea itself.

The first coworking space, called C-Base, was founded by a group of hackers in Berlin in 1995. The organization developed into a nonprofit which hosts community events as well as providing space for hackers, programmers, and other technologists to learn from one another in the same space.

These communities—often referred to as hackerspaces—took off in Germany following C-Base’s opening. Throughout the late 90’s, about a dozen coworking spaces for hackers popped up around the country. Today there are more than 770 hackerspaces around the world, including the Omaha Maker Group.

The needs of hackers made their work conducive to a coworking environment. Technology and software could be shared and built upon by others, and there was always a team available to help troubleshoot.

As time went on, creative thinkers began to wonder if this model could be applied to other industries. Game designer Bernie DeKoven is credited with coining the term coworking, which he defines as a work system that allows people to “work together as equals.”  DeKoven was not referring to a physical space, instead thinking of new methods of creating a community within work environments.

The first real iteration of today’s coworking model opened up in Vienna in 2002. Like many other spaces, the collaborative was geared towards entrepreneurs and creatives. This paved the way for the first official coworking space to open in San Francisco just three years later.

The San Francisco space—fittingly called the San Francisco Coworking Space—was initially only open two days per week. Despite a few months with no one inhabiting the space, it soon grew in popularity and turned into The Hat Factory, the first full-time workspace referred to as a coworking space.

Throughout the rest of the 2000’s, coworking slowly gained traction around the world and in the U.S., and by 2010, 600 coworking spaces had been established worldwide.

2010 saw the humble beginnings of now well-known coworking giant WeWork, which collapsed in 2019 after a disastrous initial public offering. Regardless of how things ended up for the company, its massive success led to much more recognition of coworking. At its peak, it was the largest private office tenant in Manhattan. Interestingly enough, WeWork announced this month that they will attempt to go public again.

WeWork only held a small share of the coworking market, but they widely popularized the idea. Statista estimated that in 2019, about 23,500 coworking spaces were open worldwide.

We are all far too familiar with how Covid-19 disrupted our lives—and it disrupted the coworking industry all the same. Predictably, as most businesses that utilized coworking spaces moved to remote work, the need for coworking spaces declined. In the Coworking Resources 2020 Global Coworking Growth Study, it was reported that the market is forecasted to experience much slower growth in the next two years as the industry rebounds from the coronavirus.

However, the impacts of the pandemic may drive more people to get involved in a communal space. For some, remote work has been a blessing. But others are itching to get back into a swivel chair to do work the way they used to.

In a way, coworking fits somewhere in between the office and the home—it’s a place to go to get work done, but you don’t have to deal with the office politics often present in business settings. It can often be more personalized than a traditional office, and you can surround yourself with others who can bring fresh, outside perspectives.

I am certainly not an expert in business trends, but I see the value in coworking in a post-Covid world. A lot of us are tired of feeling isolated, and a non-traditional office setting could be a great way to explore this new landscape of work.