In the “what is” series thus far, we have discussed many ways that startup businesses can garner financial and technical support—from private equity to venture capital to startup incubators.

But what about startups that have grown with little to no outside investment?

There are a myriad of methods that entrepreneurs use to bootstrap their startup. One of the most popular is owner financing—using your own personal income and savings to start and sustain the company throughout its early stages. Owners may also take out loans or a line of credit to support the business.

In a successful bootstrapping process, the business begins to progress once money from customers begins coming in. Money from customers is reinvested into the business. Once a company is bringing in some money, they will be able to scale. At this point, many entrepreneurs consider taking venture or other types of capital to fund expansion.

What are the pros and cons of bootstrapping?

There are obvious advantages to taking this route, namely ownership of and control over your business. As we discussed last week, taking venture capital or private equity can force an entrepreneur to hand over the reins to their investors. With bootstrapping, you are completely in control of your startup’s trajectory. 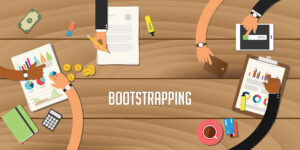 Jackie Hermes, a serial entrepreneur and CEO of Accelity, wrote in Startup Nation about her choice to bootstrap her startup.

“It was terribly difficult, especially in the early days,” she writes. “But by not using any alternate sources of funding, I ultimately had more input on the direction my company was heading.”

Not taking outside money also creates obstacles—because obviously, you have less money to work with. Though this is possible to work around in some industries, sometimes the capital you have on hand simply isn’t enough to fund a big idea.

Bootstrapping is also an incredibly time-consuming process. If you want to build a company to sell and make a quick exit, this type of funding is likely not the right fit for you.

Much of the profit from sales must be reinvested into the company to keep it going—which means less money in your pocket. Hermes says that she barely paid herself for the first five years of the process.

“No one starts a business to be broke, but that’s kind of what you’re choosing if you bootstrap,” she said. “When you’re reinvesting most of your profit, you don’t have money to pay yourself.”

Bootstrapping is a risk—but it’s one worth taking if you have the time, energy and capital to invest into growing your own product from the ground up. Check out some examples below of companies that have successfully bootstrapped

One of the most successful recent examples is that of GoPro, which CEO Nick Woodman started with $10,000 he raised by selling belts out of his van. The multi-billion dollar company is now a household name—but the first prototype was built by Woodman himself with a 35mm analog camera. For 11 years, he took no outside money as he built GoPro.

In very recent news, MailChimp was just acquired by Intuit in a $12 billion deal. When two web designers started the business as a side project, they made the decision to not take any outside money—and they stayed true to that until this acquisition.

MailChimp is a great example of how a successfully bootstrapped business can evolve and make its owners a significant profit. If you have a big idea and the work ethic to execute it, bootstrapping can be a great way to make sure you keep control of your company until you are ready to let it go.