UNeTech Institute is pleased to welcome to its team Noah Wester, who will serve in the brand new role of 3D design technician. Wester has over 20 years of marketing, customer relations, and information technology experience specializing in the holistic and functional medicine health fields. His work has included installing new medical devices, hardware, and software, as well as training staff in use and developing workflow and procedures. He recently graduated from the Metropolitan Community College Prototype Design Program and was employed at the Center for Advanced and Emerging Technology Prototype Design Lab. While there he learned a comprehensive prototyping workflow that moves from concept design all the way to manufacturing. 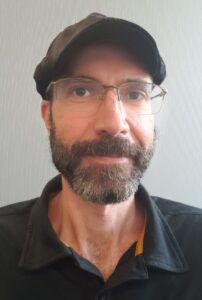 Wester said he was drawn to the role following his fellowship with UNeTech at MCC. “I enjoyed participating in the UNeTech Fellowship program while completing my degree in Prototype Design at MCC. Being a UNeTech Fellow was a positive experience working with UNMC professionals to advance creative ideas for new medical devices. When the UNeTech 3D Design Technician position became available, I saw a logical progression to transition from employment at the MCC Prototype Design Lab as I would continue to collaborate with colleagues at MCC in a new role benefiting both organizations.”

Associate director of UNeTech Institute, Joe Runge, developed the new role out of a need for a full-time 3D designer to collaborate with the MCC design lab to develop prototypes full-time for new innovative healthcare products that come both out of UNeTech’s incubator and from the startup community. “Even though they are so busy providing life-saving healthcare, the people that take care of patients at UNMC also keep inventing stuff,” Runge said. “UNeTech has shown how even a small amount of support really nurtures these new inventions. With Noah, we have a full time professional on staff to make clinical inventions into tangible reality!”

Runge said he sees Wester’s role as a crucial connection between current UNeTech staff and UNeTech’s community partners. “Noah will provide enormous help to UNeTech by designing the prototypes to test inventors’ ideas. He will also coordinate a team that spans UNO, UNMC, Metro Community College and a network of community makers to solidify Omaha’s role as a MedTech innovation hub.”

UNeMed‘s licensing associate Tyler Scherr worked with Runge to hire Wester, and confirmed that he is an ideal hire. “Noah is the perfect fit for this position,” Scherr said. “As a former UNeTech MCC EDA Prototyping Fellow, he essentially trained for this position by working with multiple clinician inventors to create CAD models and physical prototypes of medical device concepts. Add in Noah’s attention to detail and calm demeanor and we couldn’t be happier to have Noah join the team.”

Scherr also confirmed that Wester’s previous work with MCC made him a natural fit for the role. “Noah will be spending time at both UNMC and MCC,” Scherr said. “We were lucky to formalize a working relationship with MCC through our EDA i6 grant and we literally would’ve never met Noah without Metro collaborating with us to create this program. Noah will help clinicians create prototypes and eventually coordinate a team of talented MCC students to help with the process.”

These are all roles that Wester said he looks forward to serving for UNeTech. “As 3D Designer for UNeTech I hope to contribute to the evolution of cutting edge medical care through collaboration with UNMC medical professionals and supporting staff using leading Design, VR/AR Visualization, and Manufacturing technologies,” said Wester.