Finding a viable team is essential to a successful startup. Employees are the backbone of a company and meeting their needs is vital. Part of the job when founding a startup is ensuring all employees receive equal, fair treatment and feel accepted in their work environment.

Balancing work and personal life is a struggle for all parents. Finding time for extracurriculars, appointments, and fulfilling all work duties isn’t an easy task. It can be even more challenging for LGBTQ+ parents. According to the American Psychological Association, 43%-68% of LGBT individuals reported experiencing employment discrimination.

Jenny Cupak is a mother to a six-year-old boy who she raises with her now ex-wife. She is pansexual (attracted to someone regardless of their gender). Her experience with navigating a work environment is different than some. 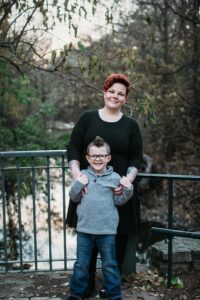 Jenny Cupak and her son

Jenny said she has had good and bad experiences when it comes to employers. She said her job at the time her son was born was very accepting of her and her family dynamic. When her son was two, she received a promotion and switched departments. “My new supervisor was not very accepting of my family dynamic and with that came a lot of challenges,” she said. She said her new supervisor was not flexible when it came to typical issues parents face, like needing to be home because their child is sick. They didn’t allow her a single day off for bereavement after a death in the family. She decided it was time to quit and now works for a very accepting and supportive company.

Jenny said it was “very disheartening working for an organization that has a reputation in the community for being open and accepting to their employees and customers.” We did not want Jenny to name her previous employer, but she made it clear she felt discriminated against based on her LGBTQ+ status. “When your direct manager would display discrimination towards you for who you are, it makes it hard to want to give your all to a company when it becomes blatant that they don’t care about how their employees are treated when it’s not displayed in an open environment,” Jenny said.

Startups must consider what they’ll do to avoid discrimination like Jenny feels she faced. Homero Vela is an employment attorney for Barkdoll & Von Ahsen, LLC where works with small businesses. His advice for company’s starting out is to create a well-written employee handbook, as well as to establish a solid hiring process. “The first thing is your application, your hiring process, your interview process,” he said. “If you don’t start there, you don’t even get to the question of treating everyone fairly.”

Everyone who has a child while working deals with parental leave. In a “traditional” relationship, the mother gets time off while the father gets little to no time off. So, how does it work for a same-sex relationship? In Jenny’s case, she and her partner both received paid time off. Jenny took ten weeks (her employer allowed for twelve) and her ex-wife received four and a half. She is unsure if it was classified as maternal or paternal leave.

In a previous blog, we discussed meeting at incovenient times for employees who parent children. Jenny currently works for female-dominate company and noticed something interesting about schedules. Most meetings are scheduled during the day as compared to early mornings or late afternoons when people are picking up their children. Whenever there is a meeting at an odd time, she said, it’s scheduled by a man.

Whether it’s a startup or a well-established corporation, the needs of every employee must be met. It’s not just about finding a great team, it’s keeping that great team.